This is the first thing I came up with when I decided to go with Chardonnay as my wine for the challenge.  I might try something with the Merlot from last month, but due to a previous lack of proper equipment I now have a very full bottle of Chardonnay, and these cupcakes are SO GOOD that I might just keep experimenting.

I had to buy two bottles of Chardonnay.  See, the first one I bought, we couldn’t open.  We improvised a corkscrew for the Merlot, since we didn’t have one.  We couldn’t figure out how to do it again for the Chardonnay, so I went and found an old pocketknifey thing I had packed away and tried to use the corkscrew on that.  Turns out the pocketknifey thing is not made from very strong metal and the corkscrew broke right off in it.  So we decided to try and pry the cork out.  I broke the cork.  The top half came straight off, and the rest was firmly wedged deep in the bottle’s neck.  So we decided to hammer the cork in, because why the hell not.  The edge of the bottle’s opening chipped and bits of cork were visible in the wine.  I gave up and went to the store for another bottle and a corkscrew.  Ah, proper tools.

We had some epic grocery adventures yesterday, and (among other delicious things) I got some cheesecloth, and before bed last night (and directly after starting up some more bread dough…and sorting through some sage…and oiling my cutting board and pastry rolling pin…etc.) I took the corkscrew to the “ruined” bottle, successfully got the cork out, and poured the Chardonnay through some cheesecloth into a jar.  Hooray!  It was pure again!

…However, I don’t have a funnel, so I used a bent plastic lid and did everything over the sink.  I had too much for the bottle, so I had to drink some.  I’m starting to like wine.

So.  Anyway.  The cupcakes.  Well, since I was just totally improvising and didn’t know if the cakes themselves were even going to work out, I didn’t try anything too daring.  Luckily, every component turned out really good and come together for a fruity, surprising cupcake.  I just cobbled together the cakes, some curd filling and a buttercream frosting from things I’ve made before…The cake recipe is the one I used for the Fit for a Bear cupcakes (and I do mean to revisit that frosting!), only I replaced the milk with Chardonnay and added about 1/4 tsp ground nutmeg.  The curd is from my first entry in Iron Cupcake, with white grapefruit zest and juice (and what a grapefruit…smelled SO good…ate its friend with some vanilla sugar).  The frosting (which gave me a little trouble and it’s totally my fault) is just the Merlot buttercream, with some fresh ginger juice and a little vanilla extract.  The cupcakes taste pretty awesome, though they’re not the most colorful cupcakes I’ve ever made (just wait for my second entry…I just received the final ingredient via UPS).

Color enhanced to break monotony. (All the color comes from the yolks.)

You may have noticed that I scooped the insides out instead of piping the curd in.  The curd didn’t really set as much as it needed to for me to have piped it, so that’s the explanation there.  I used the cone method or whatever it’s called…The curd kind of soaked into the cake in the middle and set up a bit more; you don’t get drippy curd everywhere when you eat one.  It was tough doing the itty bitty ones I made, but a fish boning knife worked surprisingly well.

…I was just downstairs holding a bottle open under my nose, waving a fruit in one hand and a double-wrapped plastic bag of something else in the other…That’s a terrible clue to my next cupcake that will give off all the wrong impressions.  I’m weird, but I had to make sure the components smelled good together.

We look much blander than we taste...

I’m really excited to get to work on those cupcakes (and use some of my other fancy new cupcake wrappers!) but I have bread dough to poke at, exercising to do, what will almost definitely be some completely delicious risotto to re-attempt (what kind of stupid crushed rosemary shaker HAS A GIANT HOLE instead of a shakey top?), some sage leaves to try to fry (teehee), a meat-and-potatoes dinner to make with the help of my brand new cast iron skillet…Yikes.

I’ll leave you with the recipe. 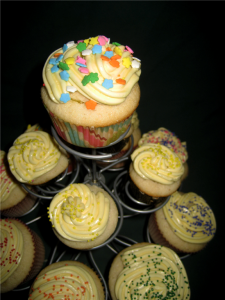 That's King Cupcake. He was delicious.

First, make the Grapefruit Curd (you can use ruby red or white):

In a small saucepan, whisk together the eggs and yolks, then whisk in the sugar, juice and zest.  Then add the butter and whisk continuously over medium-low heat until thick (between 5 and 10 minutes).  Remove from heat and strain immediately into a bowl.  Cover with plastic wrap pressed down to the surface of the curd, and poke a few holes in the wrap to let steam escape.  Refrigerate for at least 8 hours.

Then, make the Spiced Chardonnay Cakes:

Preheat oven to 350.  Place everything but the whites in a mixing bowl and blend on a low speed for a couple of minutes, then add the whites and mix for another couple of minutes at a high speed, until everything is fluffy, well-blended and smooth.  Pour into muffin tins lined with cupcake papers, filling cups about 2/3 to 3/4 full.  Bake 10-15 minutes, or until a fork inserted into the top of one comes out clean, but not until they start to brown.  Allow to cool fully before attempting to fill and frost.

Once the curd has set and the cupcakes are completely cool, use the injection method or the cone method to fill the cupcakes with curd.  Set aside (refrigerated if you kitchen is really hot).

Place yolks into a mixer bowl and, using the wire whip attachment, whip on high until light in color and foamy (about 5 minutes).  While it’s mixing, combine the sugar and water in a small saucepan over medium-high heat, and bring to 238 Fahrenheit.  Immediately pour the sugar syrup into a Pyrex liquid measure.  With the mixer off, drizzle the syrup into the yolks gradually, mixing intermittently until fully incorporated.  Whip until cooled to room temperature, then switch to the paddle attachment and add butter a bit at a time, mixing each chunk in fully before adding the next.  Beat the mixture until light and fluffy.  Add vanilla and ginger.  Spoon frosting by fourths into a pastry bag fitted with a star or round tip and decorate your cupcakes however you like.

The spices are surprisingly understated, but help to round out the tart, almost rude zing of the grapefruit filling.  The cake is soft and light and just lightly caramelized around the top edges, and is noticeably fruity.

As an added bonus for January, our friend at SWEET CUPPIN CAKES BAKERY AND CUPCAKERY SUPPLY will be tossing in another treat as well, http://www.acupcakery.com/index.html.